What is inclusive language?

Inclusive language is a language that demonstrates respect for others and promotes the acceptance and value of all people. The University of Queensland’s Guide to Using Inclusive Language defines inclusive language as being “free from words, phrases or tones that demean, insult, exclude, stereotype, infantilize or trivialize people on the basis of their membership of a certain group or because of a particular attribute.” In the disability community, when the term inclusive language is used, the speaker is commonly referring to person-first language and identity-first language. In order to fully comprehend the significance of these two languages though, it is important to understand their bases.

From the Medical Model to the ADA 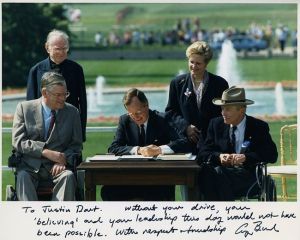 The medical model of disability emerged around the 18th century, defining disability as a series of biological deficiencies located in the body. Previously seen as the result of divine intervention, disability became a medical issue, requiring the services of trained professionals. People with disabilities were perceived as patients needing to be cured or fixed. At this time, the approved medical terminology for people with disabilities was “feeble-minded” and “mentally retarded.”

Inspired by the civil rights movement of the 1950s, disability activists saw the opportunity to advocate against the stereotypes ensued by the medical model. The activists petitioned alongside other minority groups for equal treatment, equal access, and equal opportunities.

Modeled after the 1964 Civil Rights Act, the Americans with Disabilities Act (ADA) created broad civil rights protection for people with disabilities. Signed July 26, 1990, the ADA is the first comprehensive federal law to address the discrimination against Americans with disabilities in the areas of employment, public service, accommodations, and telecommunications. The ADA also marks the first use of person-first language in legislation.

The Social Model and Identity-First Language

In the 19th century, Mike Oliver pioneered the social model. The model drew from his belief that people with disabilities were not broken and in need of fixing, but that society itself was. Mike Oliver believed that a person’s limitations were not the cause of the problem, but rather, it was society’s failure to provide appropriate services and accommodations to ensure that the person with disability’s needs were taken into account. For example, a wheelchair user who is unable to access a business on the second floor is not limited by their disability, but by the inaccessibility of the building. The social model has since further evolved to defend autonomy and personal freedoms.

As the mentality evolved, so did the language. Identity-first language emphasizes that a person’s disabilities play a role in their identity and reinforces disability as a positive cultural identifier. The language is often associated with empowerment, i.e., “I am an autistic person” instead of “I am a person with autism.”  Identity-first language is favored among younger generations of self-advocates and has long been a characteristic of Deaf culture.

Is there a correct language style?

According to the National Center on Disability and Journalism, there is! The NCDJ says to “use people-first language unless otherwise indicated by the source” or, “if the source is not available or unable, ask a trusted family member or relevant organization that represents people with disabilities.” With that being said, it is the best practice to refer to people by their name and not their disability.

Katrina Boik / About Author
Katrina is the Director of Community Engagement at SOAR Behavior Services. She loves helping families of children with disabilities navigate systems and access community resources. She also enjoys creating marketing materials, learning management systems, budgeting, and strategic planning. When she is not working, Katrina is volunteering with People First of Washington and Special Olympics. :)
More posts by Katrina Boik