What is “Mental Age Theory”?

The concept of “mental age” was first introduced by Alfred Binet, co-creator of the first IQ tests in the early twentieth century. Alfred believed that to determine a person’s mental age, they must take a standardized IQ test and compare their results with the average performance of their same-aged peers. For people with intellectual and developmental disabilities, their demonstrated physical, speech, adaptive or cognitive skills also contributed to their mental age.

According to Juan Ramos, Lewis Terman, the primary developer of the first IQ test and corresponding scale, classified the scores in this way (keep in mind, the average IQ score for any age group is 100): 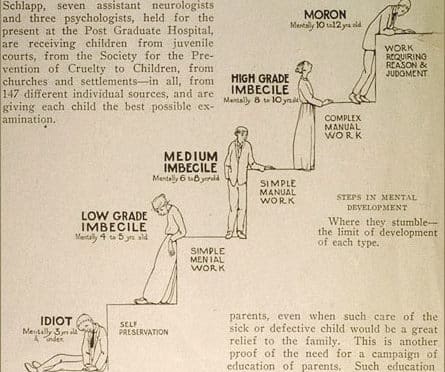 Besides the disturbing history of mental age theory, the use of mental age to classify individuals is problematic because it reduces a person’s complex nature, does not allow them to grow beyond their determined mental age, and can be used to limit personal freedoms.

First, mental age oversimplifies. Boiling an individual’s intellectual, developmental, and adaptive functioning down to a single number obscures that person’s complexity. Some individuals may be highly skilled or knowledgeable in some areas while experiencing impairments or naivete in others. Tests that measure only one or a few kinds of intelligence can miss other intelligence or compensatory skills that the individual poses. Intelligence test scores can also be biased by social and cultural factors unrelated to actual intelligence or abilities.

Second, mental age is viewed as a ceiling. Chronological age is, by definition, a dynamic concept. People are constantly aging, which is why age minimums are considered relatively acceptable in society; they are temporary. Eventually, everyone will get old enough to drive, vote, or buy a drink. In contrast, though, mental age is often described as a limit that someone reaches and cannot exceed. An adult labeled as having a mental age of 3, 7, or 10 is expected to think and act that way for the rest of their life.

In the 2001 film “I Am Sam,” the protagonist is a single father labeled with a mental age of 7. It is strongly implied that he will no longer be a fit dad after his child turns eight because his daughter will continue developing while his development is locked.

Although adults with intellectual and developmental disabilities may reach plateaus in specific skills, everyone has the potential to adapt or improve their life circumstances. There have been powerful stories of adolescents or adults with severe communication impairments, for example, who showed great leaps in communication skills when presented with the right technology, the right support person, or both. Often it is discovered that these individuals had knowledge and skills that they were previously unable to express. Mental age labels artificially restrict that growth process.

Third, mental age is used to limited a person’s freedoms. Outside the disability space, we understand that younger children usually need more support than older children. We also reserve some privileges (like driving, voting, or buying alcohol) exclusively for older teens and adults. In the disabled world, too, presumed mental age is used to deny privileges to a person with a lower mental age. The prevailing belief is that people with disabilities are childlike, leading to many parents and educators infantilizing them.

Infantilisation is very familiar issue to me. I have a developmental disability, and my parents—my father in particular—infantilized me as a teenager and a young adult. I wasn’t allowed to do what many of my peers were allowed to do; my parents claimed that I ‘wasn’t ready for many of the things everyone else my age seemed to be allowed to do, like going to school dances. My parents restricted what I read, thinking that I wasn’t mature enough to handle heavier themes in books, TV, and films despite encountering similar subject matter in my assigned readings at school. They would force me to attend church even when I’d told them clearly that I was no longer religious; they justified this by claiming ‘in our house, we serve the Lord’, even though I was only going through the motions of practicing Christianity. … When I was nineteen years old, my parents installed parental controls on my Windows account. … I was old enough to vote. In fact, I had voted when I was eighteen; I distinctly remember being eager to vote against George W Bush in 2004. My parents didn’t always give me the right to try, or if they did, they would do it begrudgingly and blame me if whatever I tried didn’t work out, instead of listening to me and working with me to identify strategies that did work for me. For them, supporting me entailed controlling me.

As Finn points out, these actions are not just insulting and frustrating but could also be dangerous. A teen or adult with an I/DD still has desires concomitant with their chronological age, including a desire for autonomy. An individual who has been infantilized may gravitate toward peers who seem to respect their independence. If that same individual has never been educated about sex, drugs, or other issues relevant to their chronological age, they could be an easy target for abuse and exploitation.

Ironically, age can be used as a weapon, too. An adult with I/DD may be denied support due to their age or admonished to “act their age” during a public meltdown. But, many non-disabled adults have meltdowns, too. Being an adult does not mean one lacks support needs, just as having support needs does not mean one is essentially a child.

So, how do we combat thinking based on mental age theory?

First and foremost, we need to stop using a person’s mental age as a defining characteristic and differentiate maturity from support needs. Ivanova Smith suggests ways to concisely describe another person’s support needs without any reference to mental ages. For example, Emily can’t drive due to a developmental disability, which causes her to struggle with multitasking and hand-eye coordination; Tom may need support with emotional regulation because he processes emotions differently than other people.

In a related vein, we should not excuse individuals’ behavior based on their determined mental age. For example, if Steven bites another child in his 3rd-grade class, his behavior should not be overlooked because he has the mental age of a four-year-old. This will only result in more issues down the road.

In addition, people with disabilities need to be able to make decisions for themselves. As children, individuals with intellectual and developmental disabilities often receive direct support from their parents or other family caregivers. Once these children become adults, they may still need help, but having a parent continue to be the disability-related support worker can become a conflict of interest. When parents support their children, they hold authority in the relationship. On the other hand, when adults get support from readers, sign language interpreters, or personal care assistants, they benefit from being in charge of the interaction. It can also be difficult for a parent and adult child to renegotiate a supportive relationship so that the parent is essentially working for their adult child (even if unpaid). To the greatest extent possible, adults with disabilities need to have self-determination in directing who will support them, when the support is given, and where the support will occur. Depending on the resources available and their specific limitations, family members may need to help in the form of supported decision-making. According to ACLU, “Supported decision-making (SDM) is a tool that allows people with disabilities to retain their decision-making capacity by choosing supporters to help them make choices.” You can read more about SDM here or as an alternative to guardianship here.

Katrina Boik / About Author
Katrina is the Director of Community Engagement at SOAR Behavior Services. She loves helping families of children with disabilities navigate systems and access community resources. She also enjoys creating marketing materials, learning management systems, budgeting, and strategic planning. When she is not working, Katrina is volunteering with People First of Washington and Special Olympics. :)
More posts by Katrina Boik